This is an in-depth overview of growth models in aquaculture, their use and the pros and cons of various different “popular” models. It’s the logical extension of our previous post on “Leading Indicators” that can be found here.

Growth is a parameter of obvious importance in fish and shrimp culture. Growth involves the accretion of body components (deposition of nutrients). The amounts of body components deposited and the cost of depositing these components (or nutrient utilization efficiency) are the main factors determining feed requirement and waste outputs of fish, shrimp and other animals. Consequently, better understanding of the growth pattern over the life cycle of the animal could result in significant benefits in terms of productivity, sustainability and profitability for aquaculture operations.

One of the key challenges in aquaculture is that the animal population is largely invisible to management. The total number and live weight of animals are generally not known precisely due to logistical challenges associated with counting and weighing animals. It is also common for farm data to be biased due to challenges associated with sampling procedure. Therefore, aquaculture operations would greatly benefit from approach allowing them to accurately forecast body weight and growth potential of animals.

Improved understanding of growth should first involve a better understanding of the pattern of growth, or more simply put, understanding what the animal is able to achieve, given its own biology and the rearing conditions. Mathematical growth models offer an objective and practical way of describing pattern of growth. The main characteristic desired for a growth model is its ability to faithfully describe the growth trajectory of the animals. A useful growth model should allow farms to estimate animal weight at any time between sampling intervals (intrapolation). This is very helpful for the accurate estimation of the standing biomass and the amount of feed to be distributed. Growth models should also allow forecasting body weight (extrapolation) to a certain point in time past the most recent sampling interval. This may be helpful, for example to estimate time required to achieved a given target weight (e.g. market weight).

The ADG model has been broadly used in aquaculture especially in shrimp and tilapia culture. While part of the growth trajectory of shrimp and tilapia and other fish species may be well described by a linear equation, the ADG model fails to represent the growth pattern of animals over the entire production cycle. Often both a curvilinear and linear part are present in the growth pattern of aquatic animals and therefore, ADG can only be meaningfully calculated during the linear phase of the growth. In Pacific white shrimp for example, ADG (g/day) increase with weight of the animal. The current dataset suggest at a body weight of about 3 g while a systematic analysis of shrimp farm data suggest that ADG increases to abour 8 g of body weight (Figure 1). An ADG calculated over a time interval covering portions of curvilinear and linear parts of the growth trajectory will result in biased estimates of the growth potential and trajectory of the animals.

Figure 1: Changes in ADG (g/day) of Pacific white shrimp as a function of their live weight 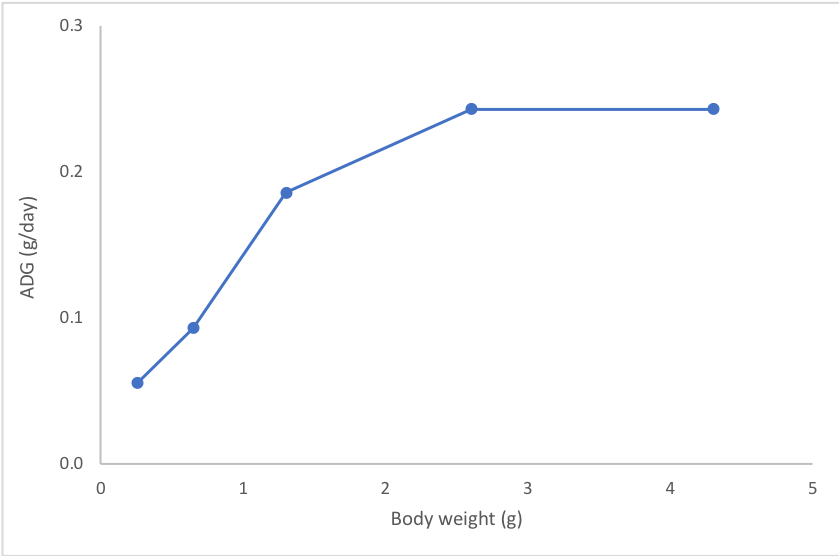 The SGR model or instantaneous growth rate has by far been the most widely used growth model. The SGR equation is based on a natural logarithmic transformation of live weight of the fish. However, despite its wide use, SGR is not an appropriate growth model either. It is widely recognized that SGR decreases with size of the fish and increases in time interval used in its calculation. Furthermore, the natural logarithm does not correspond to the pattern of growth curve of most fish species reared under normal conditions. Figure 2 shows that use of the SGR model to predict growth pattern of aquatic animal results in an underestimation of the weight gain between the live weights used in the calculation (e.g. BW1 and BW2). It also grossly overestimates predicted body weight at weights greater than the weight (BW2) used for calculation. Using this model also doesn’t allow for comparisons of growth rates among different groups unless live weights are similar (making it a poor model for benchmarking performance). Given the large body of evidence that the SGR is a growth model that doesn’t accurately represent the growth trajectory of most fish and shrimp species, it is rather strange to see that SGR is still largely used in the aquaculture industry.

Water temperature is a very important determinant of growth potential and trajectory of fish and shrimp. It has been shown that slope of cubic root of live weight vs. time increases linearly with temperature. This observation led into the development of the model that is commonly known as thermal-unit growth coefficient (TGC or GF3) model. The TGC model has been shown to represent very faithfully the actual growth curves of variety of fish species over a wide range of temperatures. This model offers a standardized measure of growth that is largely unaffected by live weight, time interval used in the calculation and water temperature. It can allow objective comparison of performance amongst culture operations, strains, production years, slots, sampling intervals, etc.

Evidence exists that fish and shrimp have distinct growth phases (or stanzas) along their growth trajectory and changes are occurring in growth pattern of the animal across life cycle. Each animal species and possibly each strain, has its own specific growth phases and optimal range of temperature. The use of a single TGC coefficient and body weigh exponent throughout the entire life cycle and a wide range of temperatures may lead to inaccurate predictions and can cause some discrepancies between the forecasted growth trajectory and what is observed in reality on farm (Figure 3). 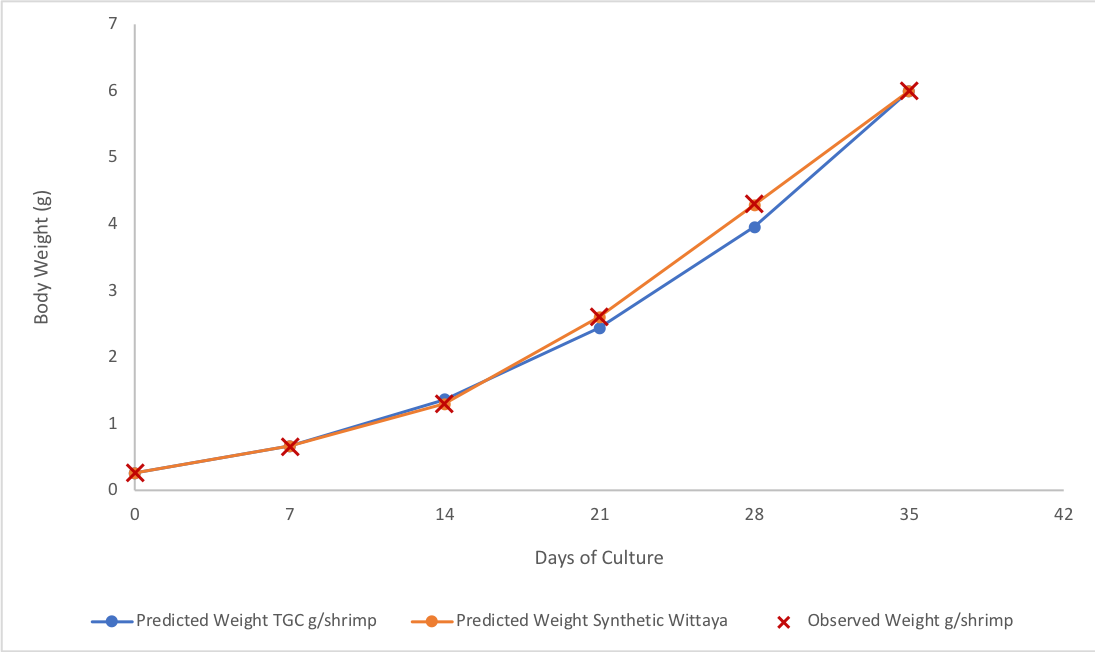 A number of academic works are available on the description of the growth trajectory of some species of fish and shrimp, but limited amount of work has been carried out under commercial conditions and they are usually based on very limited number of datasets of questionable quality. As a leader at the cutting-edge of the field, Wittaya Aqua has recognized the limitations of current mathematical growth models and developed robust proprietary growth models that allows adaptation of the growth trajectory of several commercially important aquaculture species across their life cycle (from post-larvae or fry to adult animal), and the broad range of temperature they can encounter.

The novel Wittaya synthetic growth models compute a robust growth index that allows comparison of growth across live weight and water temperature profiles. Wittaya Aqua proprietary inventory (population) estimation models and the novel Wittaya Aqua synthetic growth models have been incorporated in the AquaOp Farm platform and enable this platform to accurately estimate or predict the standing biomass at any point in time during the production cycle and can help to meaningfully estimate feed requirements, waste outputs, oxygen requirements, etc. of cohorts of animals reared in tanks, pond, cages, etc..

If you would like to talk with one of our experts and get a demo, please reach out to us at: info@wittaya-aqua.ca